A tractor can make installing a rainwater tank a lot easier

Every rural property needs a new water tank at some point. This story shows how an old leaky tank was removed, a new base was constructed and new tank installed. 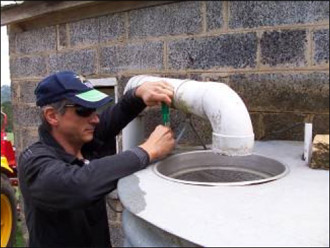 Plumbing was disconnected from the old tank

The little tank could have been removed by hand but using the 4 in 1 bucket on the front end loader to grab the edge of the tank and take it away was a breeze. 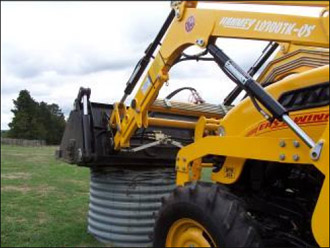 It was handy to crush the tank with the bucket

The front end loader was then used to crush the old tank to make it easier to dispose of. Warning – be careful when pushing down on objects not to raise the front wheels of the tractor off the ground.

Next the old concrete base had to be removed without disturbing the plumbing. The backhoe was used to gently loosen it. Then the 4 in 1 bucket was used again to grab the concrete pad and drag it out of harms way.

Work on the new base could then start. Opening the bucket and using the cutting edge enabled a flat pad to be cut out of the soil. 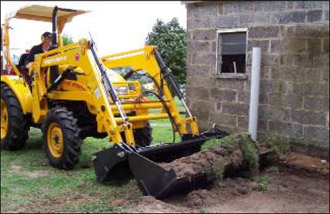 A flat pad was cut with the 4 in1 bucket

Sand was put in place with the front end loader – which would have otherwise been done with several wheel barrow trips! Sand is used to create a protective layer from any sharp objects which may be looming under the tank that could cause a leak. The manufacturer recommended a depth of 75mm of sand. The sand was then leveled and compacted with a compacting plate. 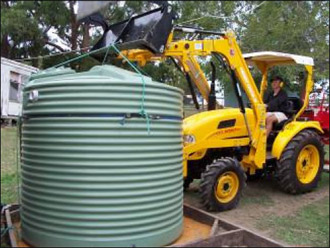 Then the pad was dragged away with the 4 in 1

The new tank was placed into position using the front end loader as a crane! Warning – it is very important that suitably rated chains or ropes are used when lifting objects. An object with a large surface area such as this tank should only be moved in conditions with no wind. Lifting with the bucket fully raised can only be done on level ground, operating at low speed with light weights. This 5000 litre plastic tank was in fact very light – it’s just that it would be quite awkward for one person to put in place by hand.

The tank was re-plumbed

The 3 plumbing points were then reconnected and finally a layer of pebbles was placed on top of the exposed sand to prevent it being washed away by rain. 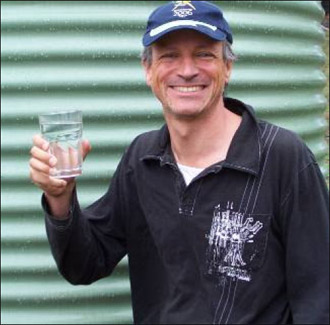 A little rain and it’s good to go!

Safety is always the highest priority. Always use a tractor that complies with Australian Standards, including Roll Over Protective Structure, seat belt and protective covers. Only take on tasks within the capability of the machine and operator. Follow all relevant safety warnings, instructions and regulations. Wear appropriate safety equipment and use common sense.

* This article is a general guide only. Conditions vary from site to site. Judgement relating to your individual conditions must be exercised. East Wind Tractors, Hanmey Implements and refurbished tractors feature in this article.